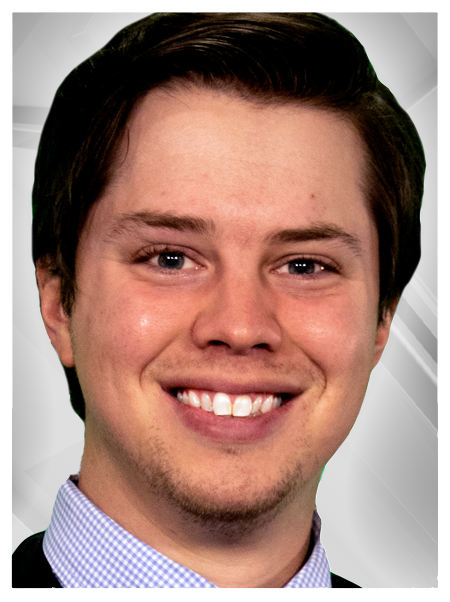 Jordan Simal is a 28-year-old Navy veteran and graduate from James Madison University’s School of Media Arts and Design.

From 2014-2018, Simal served as an Aviation Boatswains Mate (Handler) onboard the USS Nimitz stationed just outside Seattle, Washington, at Puget Sound Naval Shipyard where he was honorably discharged shortly after returning overseas from CVN-68’s 2017 deployment. From there, Simal moved to Harrisonburg, Virginia, where he excelled in journalism at JMU and served as a reporter for three years at The Breeze and Breeze TV — the university’s historic newspaper and flagship weekly television broadcast. In his final year at the school, he served as Breeze TV’s lead sports anchor.

After college, Simal became a reporter for The News Virginian — a local newspaper based out of Waynesboro, Virginia — where he covered everything from local news to politics to features in the city and surrounding communities from May 2021 to early January 2022.

Simal has a loving family back home in the rural community of King William, Virginia, which is composed of his mother, Melissa, his father, Frank, and his five younger siblings. He’s a diehard Chicago sports fan, loves America, cornhole and college football on Saturdays, and is excited to be the newest addition to the WDEF-12 news team.

CHATTANOOGA (WDEF) -- Georgia commuters' wallets have begun to breathe easier at the pump over the past few days. To celebrate, one couple hit the road with not one but…

CHATTANOOGA (WDEF) -- America's central bank will be raising national interest rates by 0.25%. It's the first time the Fed has raised the rate since late 2018.…

CLEVELAND, Tenn. (WDEF) -- On Tuesday, March 15, a Cleveland Middle School student found an electronic recording device discretely placed in the girls' locker room. After being notified by the student,…

Petition created at Lee University in response to student accident

CLEVELAND, Tenn. (WDEF) -- More than 1,500 Lee University students have signed an online petition for safer campus crosswalks. Last month, a freshman student at the school was hit at the Medlin Hall…

CLEVELAND, Tenn. (WDEF) -- The Cleveland Fire Department was dispatched this morning to a residential house fire on the 2700 block of Henderson Avenue in Cleveland. CFD Deputy Chief Pete VanDusen said the house suffered "substantial damage," and that the…

HIXSON, Tenn. (WDEF) -- The Valley's local communities woke up to the wintery white stuff to begin their Saturday. Sledding and snow angels both left their marks in the cold, and even…

CHATTANOOGA (WDEF) -- As soon as the invasion began, so did the Ukrainian Gospel Church's mission to collect donations for refugees. Everything from clothing, blankets, baby supplies and more…

UTC students concerned for future due to rising inflation

CHATTANOOGA (WDEF) -- Graduating college is a massive accomplishment and is often met with optimism about the future. However, with rampant inflation, some students at the University…

Overseas, one Cleveland native is playing a key role in training the Ukrainian police force. From those here at home, he's asking for help.

Graysville, GA (WDEF) -- Dr. Henry Benach has been to Ukraine for more than 70 missionary trips. His wife, Victoria, is a native of the country. After praying to the…

DALTON, GA (WDEF) -- "Soccertown USA" broke ground this afternoon on an impressive new sports complex to back up their game. It'll be located east of Park Creek…

OOLTEWAH, Tenn. (WDEF) -- Chattanooga's best and bravest police officers were honored at the CPD's Annual Awards Ceremony. The awards ceremony tonight was held to recognize the…

CHATTANOOGA (WDEF) -- For 45 years, Linda Moss Mines hasn't just taught history. She's stressed the importance behind it. After the Russian invasion of Ukraine, many were left…

Chattanoogans march in support of Ukraine

CHATTANOOGA (WDEF) - Members of the Ukrainian Gospel Church turned the Walnut Street bridge into a sea of blue and yellow Tuesday night. Youth Leader Assistant Maksim Mikhaylishin said their message not anger and…

CHATTANOOGA (WDEF) -- Chattanooga Firefighters rescued a woman from her burning home at the 18-hundred block of East Fourth Street Sunday morning. The woman was trapped in her bathroom after a burning candle in her bedroom accidentally caught her nightgown…

CHATTANOOGA (WDEF) -- The team behind Grayson's Ladder is wearing blue to raise awareness on this Rare Disease Day. The nonprofit is named after nine-year-old Grayson Ledbetter, who has Alexander's Disease. It's a regressive brain disease. Less than 500 people have…

CHATTANOOGA (WDEF) -- Inflation continues to ravage the local economy here in the Tennessee Valley. 40-year highs for inflation are still impacting critical resources for Chattanoogans on everything from gasoline to…

Hate crime trial being held for death of Ahmaud Arbery

Brunswick, Georgia (WDEF) -- The men responsible for the murder of Ahmaud Arbery are on trial again, this time for federal hate crime charges. However, all three were sentenced to…

CHATTANOOGA (WDEF) -- Two UTC faculty members are using a one-point-five-million dollar grant from the Tennessee Department of Health to work with faith-based communities in the state to create INDEED -- an Intrastate Network to Deliver Equity and Eliminate Disparities.…

CHATTANOOGA (WDEF) -- Chattanooga became Con Nooga once again, as hundreds of friends and families gathered inside to enjoy a day ripe with numerous events, amazing cosplays and…

CHATTANOOGA (WDEF) -- The McKamey Animal Center recently took in a dog that is now missing a leg after being shot over the weekend. The shelter does not know who shot the dog,…

CHATTANOOGA (WDEF) -- The Chattanooga Fire Department was called at 5:47 a.m. Wednesday morning and rushed to the 2000 block of Hickory Valley Road in response to a local…

CLEVELAND, Tenn. (WDEF) -- Clevelanders helping Clevelanders could be seen as one of the city's local companies came to the aid of one of its longest-tenured residents. Rivco Owner Alex Rivera and his men…

CHATTANOOGA (WDEF) -- Chattanooga retiree Ronnie McGill described it as if a battle had been won. For the first time in more than three decades, he and the fellow residents of Memphis Drive…

CHATTANOOGA (WDEF) -- Steam Logistics held a groundbreaking ceremony this afternoon for its new downtown headquarters at 328 Broad Street. The third-party logistics company is one of the fastest-growing in the nation and expects…

CHATTANOOGA (WDEF) -- The Happy Shoes Project received a generous gift from Food City this afternoon. The nonprofit was presented a check for $50,000, as well as a $2,000 Food City gift card,…

CHATTANOOGA (WDEF) -- Chattanooga's Salvation Army is set to throw a super party for the Super Bowl as part of its Beyond Love Campaign. From 6 to 10 p.m. on Sunday,…

UTC to receive new building for School of Nursing

CHATTANOOGA (WDEF) - A new Health Science Building is coming to the University of Tennessee at Chattanooga. The 92,000 square-foot building will include new classrooms, lab spaces and offices. But perhaps the biggest…

CATOOSA COUNTY, Georgia (WDEF) -- One of Catoosa County's own is stepping down after decades of service to countless students. Superintendent Denia Reese was honored with a luncheon this afternoon at The Colonnade…

BRADLEY COUNTY, Tenn. (WDEF) -- History was made Monday in Cleveland, Tennessee, as Nathaniel Grant was finally recognized as a free citizen of the United States after purchasing his freedom from slavery over…

CHATTANOOGA (WDEF) -- A fire at a local downtown homeless camp has left one woman with 15% of her body covered in severe burns. Chattanooga firefighters were dispatched Wednesday night after receiving a…

CHATTANOOGA (WDEF) -- As anyone may well imagine, there is a zero-tolerance animal abuse policy at the McKamey Animal Center. This can be seen in the case of one of the shelter's most…