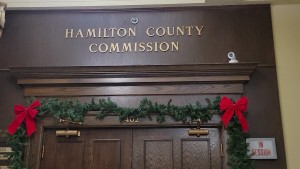 Chattanooga, TN (WDEF) – Hamilton County Mayor Weston Wamp is on the clock, as County Commission gave him a deadline of Nov. 18th by noon to form a resolution over the status of County Attorney Rheubin Taylor.“We have passed resolutions they have not been honored,” said District 4 County Commissioner Warren Mackey. “So, one of the things we’re going to look to do is to compel our actions to be taken.”

If the controversy surrounding the appointment of Rheuben Taylor as county attorney is not resolved by Friday at noon, interim county attorney John Konvalinka has been given the go-ahead by the commission to take legal action against Mayor Weston Wamp.

“When the county commission make a ruling to pass a resolution, whatever we say is the law of this county, and it is the mayor’s job to execute what we tell him to do. The other thing has to do with the challenge regarding Rheuben Taylor. We said he is still on the job, but the county mayor continues to say no he is not,” said Mackey. “In fact, he has not been paid, at least through yesterday.”

A statement from Mayor Wamp’s office reads, “Our office has been working tirelessly to come to a resolution for the past twenty-one days. I appreciate the commission’s action Wednesday, which gives us a clear timeframe in our work to resolve this matter.”

Commissioner Mackey said he believes the matter will go to court and the dispute is at the cost of Hamilton County residents.

“I don’t know what this will cost, there’ sno way to know, but I do know lawyers are not cheap,” said Mackey. “We need to go back to doing county business, creating jobs and growing this economy. That’s all I want to do. All of this craziness, we need to get past it. Citizens don’t want to see us bickering. I don’t want to bicker all I want to do is create jobs and the opportunity to encourage men and women to grow their businesses period.”

During Thursday’s meeting Commissioner David Sharpe made a motion the County Mayor’s office be responsible for any current and future legal fees due to the dispute, but his motion did not receive a second.

County Commission will meet again Friday Nov. 18th at 1 p.m. at the fourth floor inside the Hamilton County Courthouse.