Catoosa Deputy and his wife charged in drug scheme 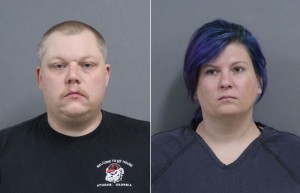 RINGGOLD (WDEF) – Catoosa County Sheriff Gary Sisk has fired one of his deputies over a drug investigation.

The Sheriff says he got some information in November about 33 year old Caleb Eugene Cavin and brought in the GBI to look into it.

Cavin and his wife, Cayla have been charged with manufacturing and selling marijuana edibles.

They charges against both include possession with intent to distribute and using a cellphone to make a transaction.

Plus he is charged with violation of oath.

The deputy was officially fired four days ago.

“All of my sworn and civilian employees are held to highest standards of integrity and respect of the law,” Sheriff Sisk said. “It is disappointing to learn of a sworn officer violating their oath to serve our community honorably.”