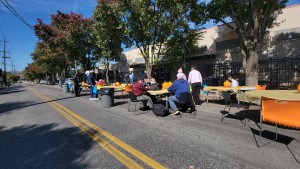 It’s been forty years since the first meal was served by Chattanooga Community Kitchen. Now, the organization does so much more than just provide meals.

In an effort to showcase their vast amount of resources ranging from housing to job training, the non-profit has been renamed The Chatt Foundation,

The center’s new name is meant to symbolize how they can provide a full foundation for someone to get back on their feet.

Baron King is the CEO of Chatt Foundation he said the organization needed a name that could meet various the needs of the homeless population.