CHATTANOOGA (WDEF) – One of the most famous veterans from the Tennessee Valley is buried at the National Cemetery.

Desmond Doss was born in Virginia and moved to our area later in life.

He is not only a much-decorated soldier, he is also a beacon for his faith.

Doss was awarded two Bronze Medals for his service in World War Two.

And he was awarded the Medal of Honor for saving 75 men at the Battle of Okinawa, maybe more.

Doss is the only conscientious objector to be awarded our nation’s top military honor.

And they made a movie about it.

Doss was brought up a devout Seventh Day Adventist and refused to carry a gun.

But when World War II came, he joined the army as a combat medic.

His war record won him accolades at Guam and the Philippines.

But his actions on Hacksaw Ridge in Okinawa got him into the Medal of Honor Museum here in Chattanooga.

As his unit pulled back from Japanese fire, they were ordered to abandon the ridge.

But Doss refused to leave the wounded behind.

He personally retrieved them, one by one, under fire and then lowered them over a bluff to the safety below.

His story is well documented, but you can find it on YouTube on the Faces of the Forgotten channel.

Ron Carlson visited his grave at the National Cemetery in Chattanooga and tells his story. 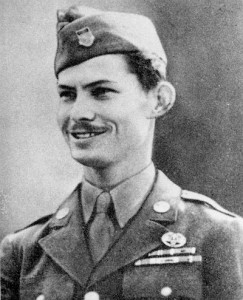