The framework plan from 2018 says the district was always 478 acres; Howard High School is included in the TIF district 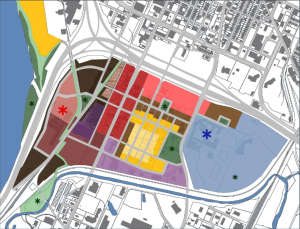 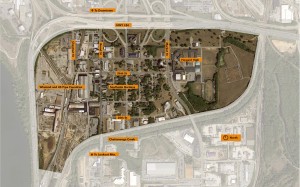 CHATTANOOGA (WDEF) – City officials are refuting one source and telling News 12 that the size of the Lookouts Stadium tax increment financing district hasn’t ‘grown’ from 120 acres to 470.

It was always that larger size.

According to the study released in 2018 on the project that can be found on SouthBroadDistrict.com, only a small portion of the district will be used for the stadium.

The article in the media outlet says the original plans for the district were for 120 acres, which encompasses the Wheland Foundry and U.S. Pipe sites.

The city’s Director of Special Projects, Ellis Smith, says that was wrong, too.

In a text, Smith said just those sites alone are 140 acres, if you include the land set aside for the Riverwalk and expressway exit for Market Street.

In the Framework Plan, that’s only the area with the red asterisk and below.

All of the areas in color mark 478 acres.

The red asterisk is where the stadium will be built.

The green asterisks are where green spaces would be. Some of that includes additions to the Riverwalk.

The blue asterisk is Howard High School, which is also part of the development.

I asked Smith about what would happen at Howard, and he said definitive plans are still in the works, but Howard will see some major improvements that will help the kids of the community.

The tax increment financing, or TIF district, for the site is expected to pay for close to 60 percent of the mixed use facility that will sit on only ten acres.

The full district would allow the city and county to receive a portion of property tax revenue generated by the new development to assist paying off the 30-year bonds for the stadium. Other money could be used to improve infrastructure, such as roads and sewers.

The city’s Industrial Development Board will meet Monday morning to discuss the plan.

Lookouts co-owner Jason Freier told News 12 he will attend the meeting, as well as Hamilton County Commission’s meeting on Wednesday to discuss the stadium plans.