Under the law, the voucher program would apply only to Nashville and Shelby County, which includes Memphis, the areas with the lowest performing schools and regions with Democratic political strongholds who opposed the measure. 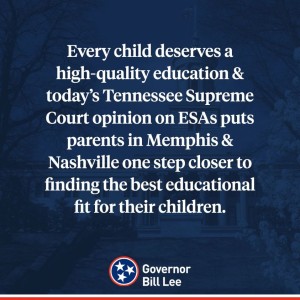 “We are disappointed that the court did not agree with the position of the plaintiffs in Metro Government – shared by the plaintiffs in McEwen v. Lee – that the voucher law targeting only Shelby and Davidson counties clearly violates the Home Rule Amendment’s prohibition on local legislation imposed without local voter approval. However, today’s ruling does not mean the voucher law is constitutional. This voucher legislation violates several other provisions of the Tennessee Constitution, including the Education and Equal Protection clauses, and those claims have yet to be litigated. The McEwen plaintiffs have asserted these constitutional claims from the beginning of the litigation challenging the voucher law, and intend to continue to vigorously pursue them.”