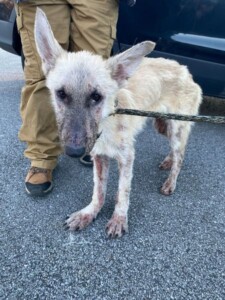 UPDATE: There’s a tragic update in this story.

McKamey Animal Center announced earlier Sunday afternoon that Asha has passed away from her injuries.

They thank the community for the support for Asha over the weekend.

They added that the investigation is ongoing and hope to have an update soon.

CHATTANOOGA, Tenn. (WDEF)- The Chattanooga Police Department is working with the McKamey Animal Center to find someone who abandoned a badly abused dog.

We do want to warn you the following images may be disturbing to some viewers.

McKamey says that around 6 p.m. Thursday night, their officers responded to Highway 153 near Chickamauga Dam.

When they arrived, they found a dog, who they are now calling Asha, emicated and dehydrated.

They say Asha is fighting for her life as she has numerous wounds all over her body.

C-P-D has started an animal abuse investigation into who abandoned Asha.

If you have any information on who potentially hurt Asha, contact McKamey’s Animal Protection Team.