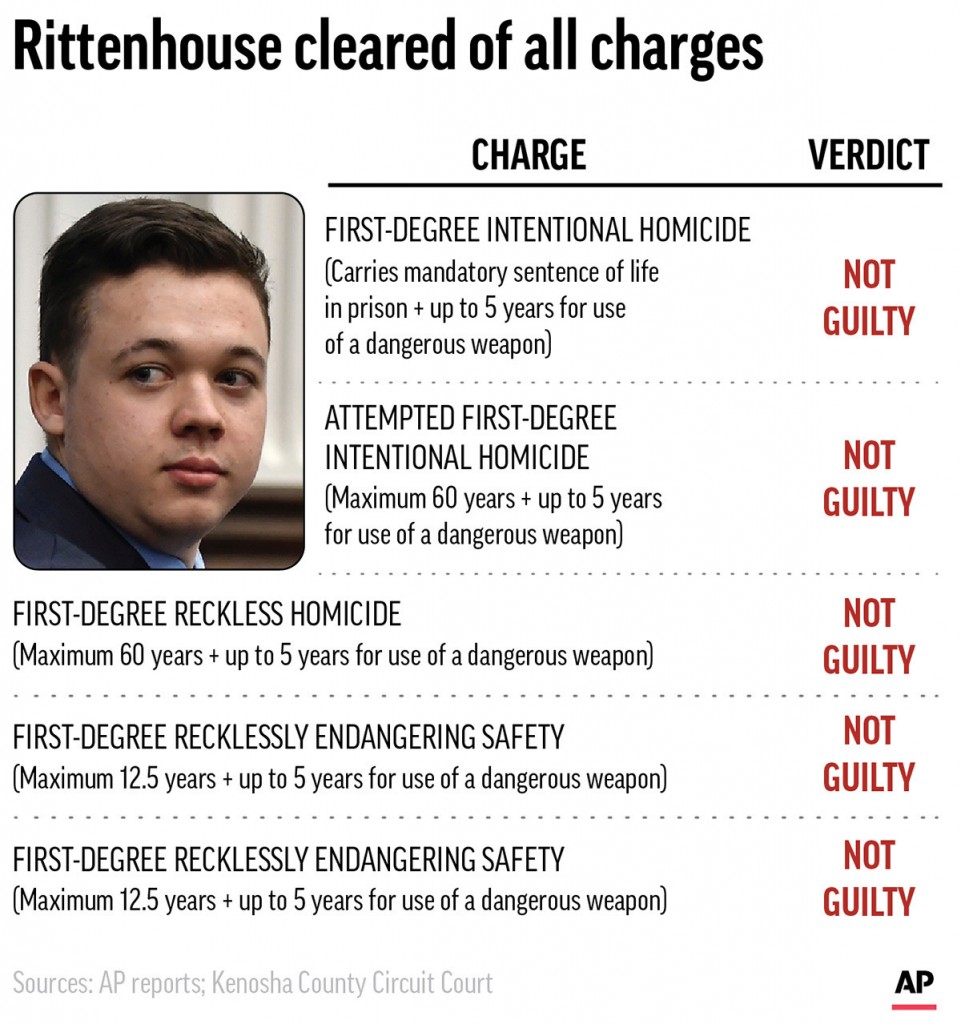 A jury cleared teen Kyle Rittenhouse of all five counts against him in the shooting of three men during racial injustice protests in Kenosha, Wisconsin in 2020. (AP Graphic)

MADISON, Wis. (AP) — Kyle Rittenhouse shot three men, killing two of them and wounding the third, during a protest against police brutality in Kenosha, Wisconsin, last year. Rittenhouse argued that he fired in self-defense after the men attacked him. Here’s a look at the charges that prosecutors carried into court, as well as lesser charges that the judge put before the jury in his final instructions.

COUNT 1: FIRST-DEGREE RECKLESS HOMICIDE, USE OF A DANGEROUS WEAPON

The charge was punishable by up to 60 years in prison. The dangerous weapon modifier carried an additional five years.

COUNT 2: FIRST-DEGREE RECKLESSLY ENDANGERING SAFETY, USE OF A DANGEROUS WEAPON

This felony charge was connected to the Rosenbaum shooting. McGinniss told investigators he was in the line of fire when Rittenhouse shot Rosenbaum. The charge would have been punishable by 12 1/2 years in prison. The weapons modifier carried an additional five years.

COUNT 3: FIRST-DEGREE RECKLESSLY ENDANGERING SAFETY, USE OF A DANGEROUS WEAPON

Video shows an unknown man leaping at Rittenhouse and trying to kick him seconds before Anthony Huber moves his skateboard toward him. Rittenhouse appears to fire two rounds at the man but apparently misses as the man runs away.

This charge is a felony punishable by 12 1/2 years in prison. The weapons modifier again would have added up to five more years.

COUNT 4: FIRST-DEGREE INTENTIONAL HOMICIDE, USE OF A DANGEROUS WEAPON

This charge was in Huber’s death. Video shows Rittenhouse running down the street after shooting Rosenbaum when he falls to the street. Huber leaps at him and swings a skateboard at his head and neck and tries to grab Rittenhouse’s gun before Rittenhouse fires. The criminal complaint alleged Rittenhouse aimed the weapon at Huber.

Intentional homicide means just that — a person killed someone and meant to do it. A conviction would have meant a mandatory life sentence. The weapons modifier would have added up to five years.

The jury also was given the option of second-degree intentional homicide and first-degree reckless homicide in Huber’s death.

Second-degree intentional homicide would have been punishable by up to 60 years in prison.

The first-degree reckless homicide charge sought in Huber’s death matched an original charge in Rosenbaum’s death — it would have required jurors to decide that Rittenhouse caused Huber’s death with an utter disregard for human life — and would have been punishable by up to 60 years in prison.

COUNT 5: ATTEMPTED FIRST-DEGREE INTENTIONAL HOMICIDE, USE OF A DANGEROUS WEAPON

This was the charge for Rittenhouse shooting Gaige Grosskreutz in the arm seconds after he shot Huber, and as Grosskreutz came toward him holding a pistol. Grosskreutz survived. Video shows Rittenhouse pointing his gun at Grosskreutz and firing a single round.

The charge carries a maximum sentence of 60 years. The weapons modifier would have added up to five more years.

The jury also was given the option of considering second-degree attempted intentional homicide and first-degree reckless endangerment charges.

The possible punishment for attempted second-degree intentional homicide is 30 years. Attempted first-degree reckless endangerment is punishable by up to 12 1/2 years.

COUNT 6: POSSESSION OF A DANGEROUS WEAPON BY A PERSON UNDER 18

The judge dismissed this charge on Monday.

Rittenhouse was armed with an AR-style semi-automatic rifle. He was 17 years old on the night of the shootings. Wisconsin law prohibits minors from possessing firearms except for hunting or when supervised by an adult in target practice or instruction in the proper use of a dangerous weapon. Rittenhouse’s attorneys argued that another subsection of the law, regarding short-barreled rifles, provided grounds for dismissing the charge.

Prosecutors argued the defense was misreading the statute, and Schroeder had earlier twice declined to dismiss the charge. But the judge also had said the statute was confusing. After prosecutors conceded that the rifle was not short-barreled, Schroeder dismissed the charge.

COUNT 7: FAILURE TO COMPLY WITH AN EMERGENCY ORDER FROM STATE OR LOCAL GOVERNMENT

Rittenhouse was charged with being out on the streets after an 8 p.m. curfew imposed by the city, a minor offense that carries a fine of up to $200. The judge dismissed this charge during the trial, saying the prosecution didn’t offer enough evidence to prove it.