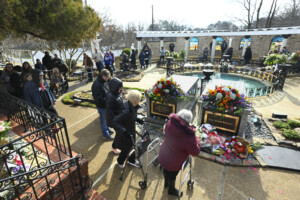 Visitors to Graceland look at the gravesite of Lisa Marie Presley and her son Benjamin Keough as the walk around the Meditation Gardens after a memorial service for Lisa Marie Sunday, Jan. 22, 2023, in Memphis, Tenn. She died Jan. 12 after being hospitalized for a medical emergency and was buried near her father Elvis Presley and his two parents. (AP Photo/John Amis)

MEMPHIS, Tenn. (AP) — Lisa Marie Presley, a singer, songwriter and the daughter of Elvis Presley, was remembered during a funeral service Sunday as a loving mother and an “old soul” who endured tragedy but persevered as a dedicated protector of her father’s legacy as a rock ‘n’ roll pioneer and pop icon.

More than a thousand people gathered on the front lawn of Graceland on a gray, chilly Memphis morning to mourn the death and remember the life of Lisa Marie Presley, who died Jan, 12 after she was taken to a hospital in California.

Some mourners held flowers as they waited for the service to begin under the tall trees on the lawn of Graceland, the home in Memphis where Lisa Marie lived as a child with her father. The mansion, which Lisa Marie Presley owned, has been turned into a museum and tourist attraction that hundreds of thousands of fans visit each year to celebrate the life and music of Elvis, who died in 1977 at age 42.

The property in south Memphis was a place of sadness and somber memories on Sunday. The service began with the singing of “Amazing Grace” by Jason Clark & The Tennessee Mass Choir.

“We would like to express our heartfelt gratitude for the love, compassion and support you have shown our family during this difficult time,” said a message from the Presley family written on the program for the service. “We will always be grateful.”

Among those who spoke during the service were Lisa Marie’s mother, actor Priscilla Presley; Sarah Ferguson, the Duchess of York; Jerry Schilling, a close friend of Elvis; and former Memphis Mayor A C Wharton, who called Lisa Marie’s parents Memphis’ royal couple and a “conduit to the throne, the keeper of the flame.”

In a soft voice, Priscilla Presley read a poem from one of Lisa Marie’s three daughters, Harper Vivienne Ann Lockwood, entitled “The Old Soul,” in which she calls her mother “an icon, a role model, a superhero to many people all over the world.”

“In 1968, she entered our world, born tired, fragile, yet strong. She was delicate, but was filled with life,” Priscilla Presley read. “She always knew she wouldn’t be here too long. Childhood passes by, with a glimpse of her green eye. She then grew a family of her own.”

After reading the poem, Priscilla Presley said: “Our heart is broken. Lisa, we all love you.”

After the service, mourners walked through Graceland’s Meditation Garden, where she was laid to rest in an above-ground grave next to her son Benjamin Keough, who died in 2020, and alongside her grandparents and great grandmother.

Wreaths and bouquets of red, white, yellow and pink flowers lined the walk up to the gravesite and the tomb itself. Fans, some teary-eyed, walked slowly by the tomb, pausing to pay their respects.

Jordan Clark, 25, traveled from Mobile, Alabama, to attend the service. She called the ceremony special and heartwarming. Clark said Lisa Marie “went through a lot” in her life and equated the service to the time when Elvis died, when “people came from all over.”

“She was born into the public, born into fame. That’s hard for some people,” Clark said. “She handled it like a champ. I think.”

Lisa Marie was 9 when her father died. She was staying at Graceland at the time and would recall him kissing her goodnight hours before he died. When she next saw him, the following day, he was lying face down in the bathroom.

After her father died, she became the sole heir of the Elvis Presley Trust, which — along with Elvis Presley Enterprises — managed Graceland and other assets until she sold her majority interest in 2005. She retained ownership of the mansion itself, the 13 acres around it and items inside the home.

A representative from Elvis Presley Enterprises has told The Associated Press that the mansion is in a trust that will go to the benefit of her children. Along with Harper, she is survived by two other daughters — Riley Keough and Finley Aaron Love Lockwood.

Riley Keough, an actor, did not speak at the service. Her husband, Ben Smith-Petersen, read a statement in which she remembers Lisa Marie taking her for ice cream, bringing her tea sets from Cracker Barrel, and leaving notes in her lunchbox.

“Thank you for giving me strength, my heart, my empathy, my courage, my sense of humor, my manners, my temper, my wildness, my tenacity,” Riley Keough said in the statement. “I’m a product of your heart.” 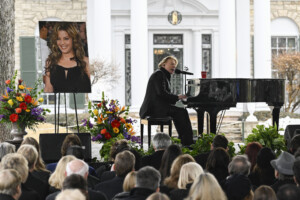 Axl Rose performs during a memorial service for Lisa Marie Presley Sunday, Jan. 22, 2023, in Memphis, Tenn. She died Jan. 12 after being hospitalized for a medical emergency and was buried on the property next to her son Benjamin Keough, and near her father Elvis Presley and his two parents. (AP Photo/John Amis)