He is considered armed and dangerous.

They say Farris fled on foot from officers Thursday at noon.

They are searching in heavily wooded area around the 1000 block of Sequoyah Access Road in Soddy Daisy.

If you see Farris, do not engage him.  Call 911 immediately. 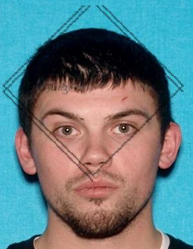 Chattanooga, TN (WDEF) – A 29 year old male was shot and killed Wednesday evening in the East Brainerd area. Chattanooga Police responded to reports of a shooting at 7300 block of Shady Vail Lane shortly before 8pm. The victim, Frederick Moore, was pronounced dead by Hamilton County EMS at the scene.

According to investigators, the victim was inside a nearby residence when a suspect shot him.

Anyone with information regarding the incident are asked to call the Homicide Tip Line at 423-643-5100 or submit a tip via the CPD Mobile App. You can remain anonymous.