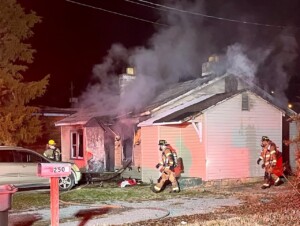 A fire occurring on the 2500 block of Wheeler Avenue. (Courtesy: Chattanooga Fire Department)

CHATTANOOGA, Tenn. (WDEF)-  A family in East Chattanooga has lost everything after a house fire early Saturday Morning.

The Chattanooga Fire Department says they responded to a house on the 25-hundred block of Wheeler Avenue shortly before 6 a.m..

There were three residents and two pets inside the home at the time of the fire.

The Fire Department believes it could’ve possibly been an electrical fire.

The residents were uninjured in the blaze.

A neighbor, Loretta Nunn, who said she’d lost a previous home to another fire, captured the blaze and described what she saw.

Nunn said, “This morning I witnessed my neighbor’s house on fire. I quickly dialed 9-1-1, and I wanted to make sure everybody made it out safe. I don’t know the people, but they are my neighbors, and I wanted to do everything possible to help them this morning. And I really, really hope that anybody in Chattanooga that can donate or help them, will come forward with some help.”

News 12 did speak with one of the owners of the house that was destroyed.

He said they woke up with their wife around 5:30 this morning to discover the house was fire and were able to get themselves, their stepson and two cats out of the house.

He said while they had lost everything in the fire, they were grateful to be alive.