Most Evaucations in Boulder Have Been Lifted at this Time 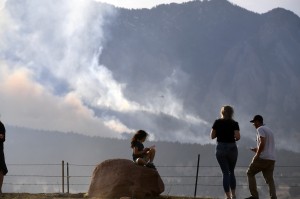 People watch as the NCAR fire burns in the foothills south of the National Center for Atmospheric Research, Saturday, March 26, 2022, in Boulder, Colo. (Helen H. Richardson/The Denver Post via AP)

BOULDER, Colo. (AP) — A wildfire south of Boulder that forced nearly 20,000 people to flee was listed at 35% contained by Sunday afternoon and most evacuations had been lifted, officials with Boulder Fire-Rescue said.

The fire, which ignited Saturday, burned to within 1,000 yards (914 meters) of homes on the west end of Boulder, said Mike Smith, incident commander. No homes were lost and no injuries were reported, he said.

A quick initial attack “combined with all of the fuels mitigation treatments that we’ve done in this area is one of the reasons that we’ve had such great success,” Smith said Sunday.

Fire crews were also able to use aircraft to fight the fire, laying down lines of fire retardant near homes in the rolling hills south of the college town, he said.

The evacuation area was reduced late Saturday to cover about 1,700 people and 700 residences, down from about 8,000 homes earlier in the day. Fire managers hoped to allow more people back into their homes Sunday as the area becomes safe, officials said. New information for those still evacuated was expected by Sunday evening, Smith said.

Work on Sunday focused on reinforcing the fire line and making sure the fire didn’t burn toward the city of Boulder or down toward Eldorado Canyon, Smith said. Crews were working to corral the fire into an area of rocks and snow.

“Today was a good day,” Smith said during a Sunday afternoon briefing as a helicopter flew in the background. “This morning was a little bit cooler, the wind was a little bit calmer and as we moved through the day we were happy to see that some of the winds that were forecast didn’t actually come to fruition.”

The containment level increased from 21% on Sunday morning to 35% on Sunday afternoon while the area burned remained the same — an estimated 189 acres (77 hectares), Smith said.

The fire burned in dormant trees and dry grass not far from where a late December fire, pushed by strong winds, burned over 9 square miles (24 square kilometers) and destroyed more than 1,000 homes.

“I think this is just a sign of the way things are going to go,” he said. “We continue to work on our planning processes. We continue to work on the team building and work with our partners to make sure that we’re as dialed as we can be. We’re feeling good, but we’re a little nervous about the upcoming season.”

The fire burned protected wildland near the National Center for Atmospheric Research, Boulder police said. Authorities have called it the NCAR fire and its cause is not yet known, although officials have found the spot where it was believed to have started, Smith said.