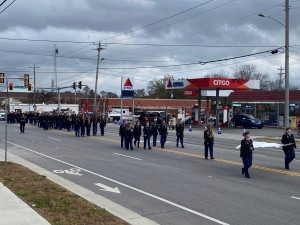 Bands, first responders, other organizations, and veteran groups stretching over a mile long came together for the Second Annual Honoring Those Who Serve” Veteran’s Day Parade! This event brings participants from all over the region to pay their respects.

Fort Oglethorpe Council Lady Paula Stinett said of the turnout that it fills her up with, “Pride. That’s all I can say. Bursting my cup runneth over with pride with us honoring our military, our police, our fire, our emergency responders. All of those who serve, and Fort Oglethorpe is proud to be North Georgia’s host of the “Honoring Those Who Served” Parade.”

News 12’s Chip Chapman was the emcee for the parade. The city of Fort Oglethorpe will also be hosting a Christmas Parade and Festival on November 26th and a “Honoring Those Who Served” Memorial Day Event in May.