CHATTANOOGA, Tenn. (WDEF)- Leslie Jordan was an icon to so many here in the Tennessee Valley and across the world.

For those who got to know the man, they have many stories to tell.  News 12’s Chip Chapman said that, “I have known Leslie going back decades, all the way back to the mid 80s when he was a student at UTC majoring in Theater Arts, and there was always something about Leslie where you knew one of these days, he was going to make it, and boy did he ever.”

The acting prowess Jordan possessed was crafted right here in Chattanooga. On an appearence on CBS This Morning today, Jordan said of his time at UTC that, “I got up in that intro to Theater class and it just hit me like a drug.”

His fellow theater arts majors at UTC recognized his potential very quickly. One such role that stood out to his friend and fellow UTC Theater Arts graduate Caroline Chipley Johnson was his performance in the play “The Crucible”.

Johnson recalled of Jordan’s performance, “He played a very strict Puritan pilgrim leader type person of the town, and was difficult and stern. Not the funny Leslie you think would come out. Who would think you cast him in something like that? Someone who wanted to see what he could do. Again, he buttoned down that exuberant bubbly personality, and he was really good, quite imposing actually.”

When Jordan wanted to realize his dreams in Hollywood, Caroline and her friends helped make that happen.  “In typical theater kid fashion, we decided to put on a show, and raise him some money to buy him a bus ticket so he could go out there.”, she reminisced. “So we closed down Vine Street Market for the night, we decorated it with flyers, we told everybody we knew. Leslie led us in writing so many skits and songs, and we brought the house down, made a bunch of money to buy his bus ticket out west.”

What his friends want you to remember about Leslie Jordan goes far beyond his iconic performances. Chapman said that “Even though Leslie was only like 4-11, his heart was as big as Texas. A very loving, generous, and caring guy.”

Johnson said that, “I would remember that underneath that exuberant exterior, there was a genuine soul that cared about you.”

Jordan passed away yesterday in a car crash in Los Angeles. He was 67 years old. 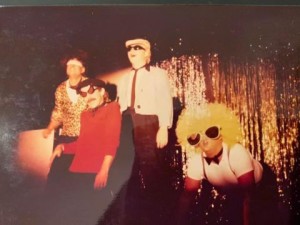 Leslie Jordan and some of his friends in college at UTC act in the Theater Arts program. (Courtesy: Caroline Chipley Johnson)