We look back on one of the hottest summers in memory

Patrick tells us that’s the hottest day we’ve seen since 2019.

So is it unusual for temperatures to get so hot so early in our area?

But we have seen worse.

In fact, this week 34 years ago was much hotter.

There are the highs and lows from the National Weather Service for Chattanooga in 1988. 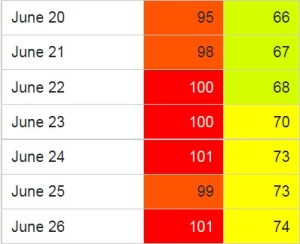 We never did see a hotter week for the rest of the summer, but we did hit 100 twice more in July, including 102 on July 9th.

The heat was bad enough.  But it also came with an early drought that continued all summer.  (In fact, we were in the middle of a 5 year drought cycle.)

So we pulled several of the stories we reported that last week of June on the heat and the drought in 1988.

It brought us water bans, low lakes and bears.