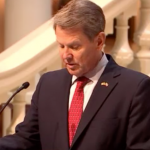 ATLANTA (AP) — Georgia Gov. Brian Kemp will push for a new state law that would loosen requirements to carry a handgun in public, as he aims to blunt a primary challenge from fellow Republican David Perdue in this year’s governor’s race.

Kemp and his wife are scheduled to join state lawmakers and gun rights advocates at a gun shop outside Atlanta on Wednesday to announce his support for legislation that would do away with the need for a license to carry a handgun in public — either openly or concealed on one’s body — according to draft remarks obtained by The Associated Press. The shop in Smyrna, Adventure Outdoors, bills itself as the “world’s largest gun store.”

“Building a safer, stronger Georgia starts with hardworking Georgians having the ability to protect themselves and their families,” Kemp’s draft remarks read. “In the face of rising violent crime across the country, law-abiding citizens should have their constitutional rights protected.”

More than 20 other states allow concealed weapons in public without a permit — or what supporters call “constitutional carry,” according to Stateline, an initiative of the Pew Charitable Trusts.

Kemp emphasized his support for the 2nd Amendment during his first campaign for governor, appearing in multiple ads with shotguns and repeatedly telling voters he was a hunter and shooter. In one ad, he sat in a room full of guns and brandished a shotgun at an actor playing a suitor of one of his daughters.

He also endorsed “constitutional carry.” But he has been less vocal about the policy since taking office, failing to mention the issue in his 2019, 2020 or 2021 State of the State speeches, when governors urge their top priorities on lawmakers.

With support from former President Donald Trump, Perdue announced in December that he was entering the governor’s race. The former U.S. senator who lost his seat to Democrat Jon Ossoff in a January 2021 runoff has identified “constitutional carry” as a top issue and slammed Kemp for failing to deliver it.

Perdue and another Republican challenging Kemp, Vernon Jones, criticized the governor ahead of Wednesday’s announcement.

“I’m glad Brian Kemp is answering my call for constitutional carry in Georgia,” Perdue tweeted late Monday. “But real leaders lead from the start – and it’s time Georgia had a Governor who shows principled leadership when it matters most.”

Kemp’s draft remarks appear to clap back, saying the view that people have the right to carry a firearm without state approval “has recently become popular for others as we enter campaign season.”

Georgia currently requires people to obtain a license to carry a loaded handgun outside their own home, business, or car, although people can carry rifles and shotguns in many places without a permit and carry unloaded guns in cases.

To obtain a weapons license, state residents must submit an application and fee and undergo fingerprinting and a background check. Convicted felons and people who have been hospitalized for mental health problems or received treatment for drugs or alcohol in the years preceding the application are not eligible.

Multiple bills currently pending at the state Capitol would scrap the license requirement. And Georgia House Speaker David Ralston has indicated he is open to some form of permitless carry legislation. Ralston set aside a gun-related bill in the closing hours of the regular session last year, saying it was too soon after the shooting deaths of eight people at massage businesses in metro Atlanta.

“It’s our inherent Second Amendment right to carry without having a license,” he said.

One key question, if licenses are abolished, is what the state would do, if anything, to try to prevent convicted felons and people with mental illness from carrying handguns outside.

Courtney Spriggs, leader of the Georgia chapter of the gun safety group, Moms Demand Action, accused Kemp of playing “political games that could cost Georgians their lives.” Spriggs worked as a law enforcement officer, and her husband is a sheriff’s deputy.