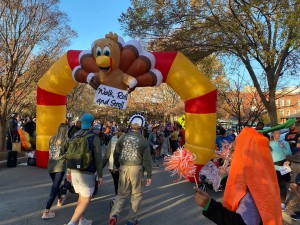 CHATTANOOGA, Tenn. (WDEF)- Thousands showed up to downtown this Thanksgiving morning to burn some calories before eating them back up.

The course began at Coolidge Park with it crossing the Market Street Bridge and running all the way down to the intersection of Market and MLK Boulevard before coming back over the river to cross the finish line at Coolidge Park.

It was quite the festive affair with several people dressing up as their favorite Christmas characters such as Buddy the Elf. Even Santa Claus made an early appearance in the Scenic City.

Behind the festivities this Thanksgiving morning, there was a larger mission in mind.

Helping Chattanooga’s homeless at the McClellan Shelter for families.

They have raised over $250,000 for the shelter. These funds will go a long way to helping these families by providing them with numerous resources.

McCright said that, “It goes to supporting the shelter where families can stay together through periods of homelessness. Now that we’ve raised so much money, we’re also offering childcare, and transportation so they can find jobs and find permanent housing.”

The McClellan Shelter is located on East 11th Street at the CHATT Foundation, formerly known as the Chattanooga Community Kitchen. It houses 13 units with 68 beds. For more information on how to help out the McClellan Shelter, visit https://chattfoundation.org/get-help.