Head of the Hooch Regatta Rows the Waterfront 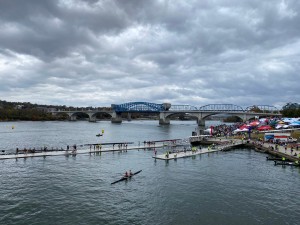 The Head of the Hooch Regatta ongoing on the Chattanooga Waterfront.

CHATTANOOGA, Tenn. (WDEF)- Rowers from all across America have descended on the Chattanooga waterfront this weekend.

The Tennessee River served as the battleground for the rowers looking to tame it. The 41st annual Head of the Hooch Regatta brought large crowds to downtown Chattanooga, whether they were enjoying the regatta right on the riverfront, or enjoying the view from above on the Market and Walnut Street Bridges.

Make no mistake, this is a fierce competition as evidenced by how much these athletes train. The Assistant Director of Registration, Chris Lemcke, said that the college teams, “The top college teams are probably doing two a day trainings, seven days a week pretty much.”

The 5,000 rowers representing 180 clubs ranged in age from late middle school all the way to the ripe old age of 86. There were a variety of competitions the rowers could compete in during the regatta on a nearly five thousand meter course.

Lemcke said that, “So for rowing, you have basically have a single, which is one person. A double, a four, or an eight. Most of them will be either each person has two oars which is sculling or sweep with one oar. In fours, there can be four oars total, or a quad, where there is eight oars total.”

The regatta began life on the Chattahoochee River outside of Atlanta, and has had a variety of home venues, but Chattanooga has grown to be its ultimate host over the past dozen years. Lemcke praised Chattanooga by saying, “Chattanooga has been super welcoming to us for a venue. Lots of support for installing our docks and everything we need to run the regatta here. The regatta has grown since it’s been in Chattanooga since the venue is so great. We have all the space to keep all the teams on Ross’s Landing here together. At other regattas you’re not all at the same spot like this together so I think it is much more of an event and a fun place to be.”

The Head of the Hooch takes place the first weekend of November every year on the Chattanooga Waterfront. Festivities continue through Sunday. For more information on the schedule, visit https://www.headofthehooch.org/.