DALTON, Ga. (WDEF)- The Herschel Walker campaign rolled into Whitfield County on Monday afternoon.The former Georgia Bulldog turned Republican candidate is criss-crossing the Peach State as he is in a tight race against the incumbent, Senator Rapahel Warnock.

As part of his “Unite Georgia” Bus Tour, Herschel Walker made a stop at the Carpets of Dalton Events Center in Whitfield County. To a crowd of about one hundred supporters, Walker leaned on his faith as a huge reason why he is in this Senate Race.

He criticized his opponent Senator Rapahel Warnock for a variety of reasons throughout his nearly 25 minute speech. Walker’s criticisms included Senator Warnock’s voting record and stances on numerous issues. One such issue he attacked him on was claiming that Senator Warnock and Democrats are installing Critical Race Theory in schools. Walker claimed that, “They’re trying to take your kids. Think about what they’re trying to do. Then when you get involved they call you domestic terrorists. Like are you serious? They’re trying to take your kid and indoctrinate your kid. You know right now kids are behind, and it’s because of Senator Warnock and Joe Biden.”

Walker was joined by Tennessee Senator Marsha Blackburn who spent her second straight day in the News 12 area trying to help flip the Senate back over to Republicans. Senator Blackburn proclaimed that, “So when you elect Herschel and send him to the U-S Senate, we’re going to send Rapahel Warnock back to church to ask for forgiveness for what he has done to the people of Georgia.”

Most current polls show the race anywhere from a statistical tie to a small Warnock lead. 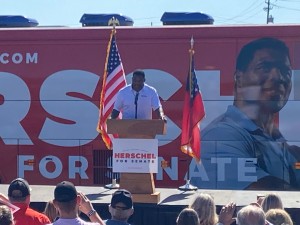