House Destroyed in Fire and Explosions in East Chattanooga

CHATTANOOGA, Tenn. (WDEF)- Four people are displaced after a fire followed by explosions destroyed their home in East Chattanooga.

Firefighters say the fire occurred in the Forest Acres neighborhood at the 2500 block of Maple Street. They responded shortly after 8:30 Saturday morning they responded to the home to battle the fire.

They had to take defensive operations due to multiple rounds of ammunition and an oxygen tank exploding within the house. All of the occupants of the house escaped, but two had to be taken to the hospital. One pet has gone missing while the other was located.

The home is a complete loss, and the American Red Cross are assisting the four residents of the home at this time. 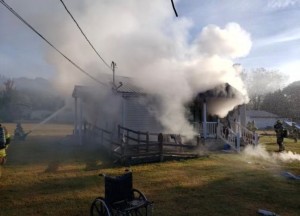