Defense presented their case on Thursday

UPDATE: The jury will continue their deliberations on Friday.

CHATTANOOGA (WDEF) – During the fourth day of the Janet Hinds trial, the state rested and the defense began to call their witnesses. It’s been a busy day in the courtroom, as closing arguments were presented- BUT one thing is evident- we will soon know the fate of Janet Hinds.

On Thursday morning, when the state announced they would rest, the defense then moved for an acquittal. Judge Poole denied any hope for an acquittal- citing that the jury had been presented with enough evidence to determine the outcome of this trial.

The defense proceeded with calling four more witnesses to the stand which included a family friend, a Hamill Road resident, and a concerned citizen. Janet Hinds, however, did not take the stand in her defense.

Conway “why would I want to speed on roads when the conditions are like that when the rain was heavy. Road conditions on that road aren’t very favorable because in my opinion it is a very narrow road and you have to be cautious when you drive on it.” 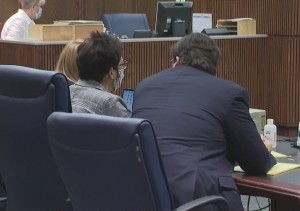 Hinds’ family friend, Traci Phillips, was with her that night at the “Farm to Fork” restaurant. She stated that she contacted the police to offer help, but that CPD failed to follow up.

Phillips “my husband and I wanted to be as transparent as possible and help in any way we could. I gave him my phone number and it’s here just in case. I gave him my street address. He said we would be in touch in a few days.”

Phillips “no sir he did not.”

The next witness to take the stand for the defense was a passerby that took photos of the barricade and manhole on Hamill Road- just moments before the accident.

DAHL “I stopped and took the photos because I thought that with the sign being down like that and the barrier being in the middle of the road, that it would cause a wreck later on that evening.

Closing arguments for each side have now concluded and instructions for deliberation have been given to the jury.

McGowan “they don’t want their brother Officer to have died for nothing. In their minds that means as police officers that ‘we need to get a conviction.’ Sadly for us that means that Janet Hinds will be the sacrificial lamb.”

Pinkston “she is the reason for the end of watch for badge 1016 occurred on February 23rd, 2019. Convict her as charged for all these accounts : for the vehicular homicide death of Officer Galinger by Intoxication , leaving the scene and all the other related charges. It’s not about anybody else. It’s about her decisions and actions on that night and that’s why we’re here.”

Poole “I’ll continue to keep you updated throughout the evening and tomorrow -as the trial of Janet Hinds continues. ”