Police dog was shot in the same woods 3 months ago

CLEVELAND, Tennessee (WDEF) – There are some amazing coincidences in this story.

Three months ago, to the day, a Bradley County police dog was shot while tracking three suspects in some woods in Bradley County.

Today K9 Joker was back on the job.

And his first bust was tracking down three suspects in those same woods.

With his same human partner.

And with the same deputy backing him up.

Three months ago, one of those suspects running from police, shot him in the face.

He just had his feeding tube removed in the last few weeks and returned to work just today.

And as fate would have it, he was called on to track three more suspects into those woods.

But this time he found them without getting shot.

From the Bradley County Sheriff’s Office Facebook page, “What a miraculous story…you can’t make things like this up and they took a picture to prove it.” 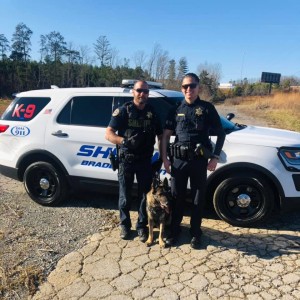 “Joker is strong and ready to serve…and this proves he is right where he belongs.”