He is suspected of threatening a school shooting, but was released on a $500 bond so police went back to his house 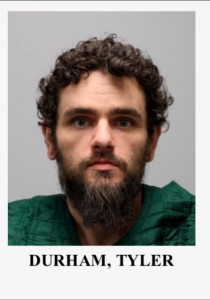 CLEVELAND, Tennessee (WDEF) – Public concern over a man arrested for making violent threats has prompted law enforcement to take further steps against him.

Cleveland Police got a tip on Thursday that Tyler Durham was threats of mass violence on social media.

They went to his home, conducted an interview and confiscated a 9mm SSCY semiautomatic handgun.

In posts on Instagram, Durham was complaining of being banned from commenting.  He said restricting his posts could result in a school shooting because he has a history of mental health issues.

No specific school was mentioned.

But Cleveland Police charged him with Threat of Mass Violence on School Property.

However, he was released again on just a $500 bond.

That’s when people began posting their outrage and sharing it.

On Friday, Cleveland Police say they became aware of the low bond.

So with the Sheriff’s Office and Cleveland Crisis Intervention Team, they went back to Durham’s home.

This time the took him “to a local facility for a follow up evaluation.”

In a release, Police remind the public that they don’t set bond for suspects, judicial magistrates do.