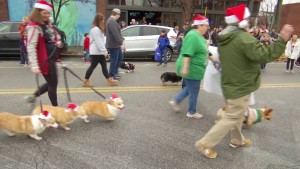 Corgis along the parade route at Mainx24.

CHATTANOOGA, Tenn. (WDEF)- The Main X 24 Festival brought many to celebrate how Chattanooga’s Southside has grown.

The festival began in 2007 by a non-profit initiative called CreateHere. It has since grown due to the work put in by businesses and residents of Main Street.

Events occur up and down the trendy area for 24 consecutive hours and range from markets to specials at restaurants on the street.

A centerpiece of the festival is the parade. Featuring bands, cheerleaders, other organizations, and even fire performers, the parade excited those who watched it along its route.

For food lovers, a can’t miss event was the World Heavyweight Chili Championship.This was the 13th annual event hosted by local environmental non-profit Greenspaces. 14 competitors duked it out over their recipes. The reigning champions, CHEOI (pronounced chili) detail just how much preparation went into their title belt defense.

Will Montague of CHEOI said, “We started as a work thing about four years ago, didn’t do so well on our first try at all. Came back with a new recipe, got second place. Then we decided to throw a little chorizo in there and it took us over the top into first place last year.”

For the Cehoi team, it took them two days to cook the amount of chili needed to compete in this competition. It’s a passion, one that they’re glad to see a large crowd interested in.

The Main x 24 Festival also plans to be back year after year celebrating the growth of the Southside.