Strike That Affected 29,000 Students and 4,500 Educators and Staff Lasted for Over Two Weeks 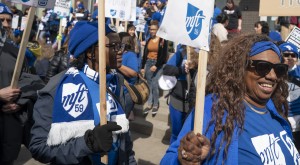 Minneapolis teachers walk the picket line on the 10th day of the teachers strike in front of the Davis Center in Minneapolis, Monday, March 21, 2022. (Jerry Holt/Star Tribune via AP)

MINNEAPOLIS (AP) — Teachers in Minneapolis have reached a tentative agreement to end a more than two-week strike over pay and other issues that idled some 29,000 students and around 4,500 educators and staff in one of Minnesota’s largest school districts.

The union for teachers and staff announced a tentative agreement was reached early Friday.

Teachers walked off the job March 8 after they were unable to agree on a contract with district leaders. The union said key differences included wages, especially for support staff, along with class sizes and mental health services for students.

The walkout sent families who had endured the most chaotic days of the coronavirus pandemic fretting anew about lost academic progress and scrambling to arrange child care.

Teachers in neighboring St. Paul reached a tentative agreement the night before the Minneapolis teachers walked out, getting a deal that had some similarities to what their Minneapolis counterparts were seeking. Union leaders cited that as evidence that Minneapolis administrators had room to compromise, too.