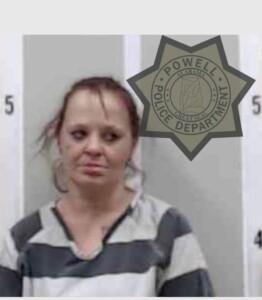 POWELL, Ala. (WDEF) — A naked woman covered in blood assaulted a police officer on Sunday, the Powell Police Department stated in a press release. They are labeling the incident as a felony assault on a police officer.

A neighbor called the police and reported that the woman, Stacey Waldrep, was nude and screaming at neighbors from her mobile home.

The Powell Police Department says when Assistant Chief Wilson responded to the incident, he observed broken windows and blood throughout the home.

Waldrep was covered in blood when she came into contact with officer Wilson. Police say she would not cooperate when Wilson told her to stay back.

The police department says the blood was from Waldrep. While Wilson attempted to get medical equipment from his patrol car, Waldrep assaulted him from behind.

Wilson took Waldrep into custody and covered her with a blanket. Paramedics arrived, but Waldrep was eventually transported to the Jackson County Jail, according to the police department.

She is being charged with felony assault on a police officer. The Powell Police Department says they expect more charges as well.

Chief Malone of the Powell Police Department commended Assistant Chief Wilson for responding to and handling the issue alone, while attempting to medically assist the woman.