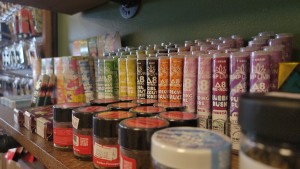 Two shops in Northwest Georgia will be able to continue selling Delta 8 and other legal THC products for the time being.

The court recently ruled in favor of the store owners request for an emergency injunction, preventing the Lookout Mountain Judicial Circuit Drug Task Force and Catoosa County Sheriff Gary Sisk from conducting any arrests or seizures. Doranda Moon co-owns ‘Stevie and the Moon’, one of the stores in the lawsuit. She has a masters degree in medical cannabis science and therapeutics from the University of Maryland School of Pharmacy.  Moon said she just wants to use her knowledge to help.

“We’re just trying to help people. We just want to be left alone, that’s why we acquired an attorney and pursued this because, we want to be left alone to help the people and do what we do,” said Moon. “It really hurt business, because I have a lot of people that come to me for my expertise that helps them with pain, insomnia. I’ve helped people get off of opioids. Just a lot of interesting, medicinal reasons.”

Stevie and the moon Co-owner Stevie Ellis was arrested in 2019 by the drug task force for selling what he said were simple CBD products. State Senator Jeff Mullis testified on behalf of the shop owners.

Moon said the most event with the Lookout Mountain Judicial Circuit Drug Task Force was when they received a hand delivered letter telling to stop selling all THC products.

“In March of this year, all businesses in Dade and Walker County and, from my understanding, the jurisdictions that are covered by the Lookout Mountain Judicial Circuit Drug Task Force was presented with a letter. Our letter was hand delivered and we were told to immediately take down our products,”said Moon. “However, we’re going by federal and state law, that we interpreted to mean that delta products are legal as long as they contain less than 0.3 Delta 9 THC.”

Moon and Ellis have hired an attorney out of Atlanta with experience in a similar situation in Gwinnett County.

“So we didn’t want to just sit back and be told that we could not sell a product that we interpreted to be legal. So we hired someone out of the Atlanta area, Tom Church. He has ongoing litigation in Gwinnett County because something similar was happening there. So, he already had the expertise that we needed for our case. He took our case, we got started, we had an initial hearing where nothing was resolved. We had our hearing on the 29th, which was almost an all day proceeding. The judge said he was not making his ruling that day, which was understandable. So, we’ve waited the past couple of days, and now he made his decision in granting us the injunction,” said Moon.

More to the Story with Staley: new Cereset franchise