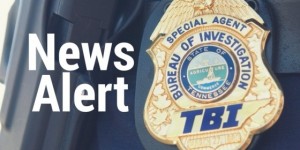 ATHENS, Tenn (WDEF).- An officer involved shooting in McMinn County is now under investigation according to a press release by the Tennessee Bureau of Investigation (TBI). The incident occurred early Sunday morning just after 2 AM on the 300 block of County Road 116. This is located to the southwest of Athens and just to the north of Riceville. Sheriff’s deputies with the McMinn County Sheriff’s Office responded to this location when they received a shots fired call.

When they arrived at this location, they encountered a man who was brandishing a handgun. This person then aimed their firearm at the responding deputies, which caused two of them to fire at the suspect. This person was struck by the gunfire and had to be airlifted to a Chattanooga hospital for treatment. There is no word on his condition or identity. No officers were injured during this encounter.

TBI special agents will be collecting evidence and conducting interviews as it pertains to their investigation. Steve Crump, the district attorney general for the 10th district of Tennessee (which represents McMinn County), requested this investigation and will ultimately act on what it finds. The TBI will not identify any of the officers that are involved in this case, and will release future updates at their website: TBINewsroom.com

Local Politicians React to Lee's State of the State