CHATTANOOGA (WDEF) -Chattanooga and Hamilton County are joining forces to develop over 100 acres of the dilapidated U.S. Pipe and Wheland Foundry sites. The vision is to turn the long neglected site into a live-work-play environment with the new Chattanooga Lookouts stadium posing as the catalyst for the development.

Master developer Jim Irwin is leading the project, he said his vision is not to get rid of the structures standing on the property, but to re-imagine and utilize them.

“We’ve heard a lot of words about like, you know, decrepit, and all these kinds of things. But, when I was brought to the site, and I looked around, in the first five minutes, I just sort of opened my eyes and what I see here is one of the most beautiful sights I have ever seen in my entire career,” Irwin said. “Because, I not only see what it is, but I can imagine in my mind what it will become. So, it’s a deep deep honor. I was joking the first time meeting Gary, I was like you don’t understand you have Disney world here, this is unbelievable.” 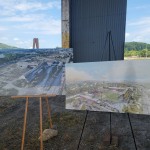 Artist sketch of new Lookout stadium. Before and after of the old Wheland Foundry plot.

Irwin called the process of re-purposing the current standing structures as “adaptive re-use.” He said projects where he gets to use adaptive re-use are his favorite.

“How can we like, integrate seamlessly with the surrounding community and make this a place that the neighborhood, the city itself, are proud to come to. With the adaptive reuse, it’s like these epic structures that are 60 or 70 feet tall and thinking about how you can actually like use them in a really fun way,” said Irwin.

According to Irwin, the project is still very much in its planning phase and they haven’t decided on a groundbreaking date. However, he predicts this area will be an attraction for more than just baseball fans.

“Every, you know, age and stage every race color, creed, you know, high income, low income. It’s a place again where the great thing about baseball and the great thing about you know open public spaces like the River walk, it’s a place where everyone comes together, and if you can celebrate that, and be integrated in a way that’s fun and interesting, and add retail and restaurants and places for people just to spend the day, that to me is the goal,” Irwin said.

Mayor Kelly said there will also be a new exit built from Interstate 24 as part of the project. The managing owner   of the Lookouts said he predicts the stadium will be in use by April of 2025.

More to the Story with Staley: new Cereset franchise