The keys to the forecast, and what I’ve been looking at over the last six or eight months, is to look at recent patterns. Weather runs in cycles. We had a cooler than normal last spring and active hurricane season, and a warmer first half of fall.

Sometimes when you kind of go through those cycles, a warmer first half of fall leads to perhaps a colder, first half of winter and that’s what I’m looking for right now. Here’s the winter outlook, as we talk about temperatures, much below normal across the northern plains. I think that’s going to be bottled up there for a good part of winter near normal, just above down into, Georgia, and Alabama, well above down across Florida. 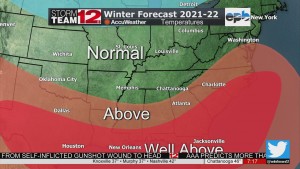 So for us, we’ll have several cold outbreaks. The coldest part of winter could be the first half of winter, from maybe the 10th of December to the 10th of January, then temperatures may moderate for the second half of the season. Our precipitation should be wetter or snowier than normal. 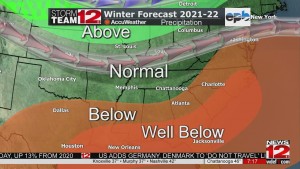 Up to the north will be kind of near normal and from Florida, on over through parts of Texas and California. It looks like precipitation could be below normal. A dry winter across those areas along the Gulf Coast. The main storm track will be up and down. Not expecting extreme precipitation, either way, as here’s what I’m expecting. 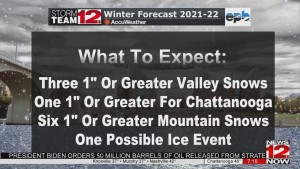 Yes, three. One inch snows in the greater Valley areas and then maybe one here in downtown Chattanooga and you multiply that guide to when you get into the mountains and wealth to watch for a possible ice event. But last year, we had a pretty good snow. I don’t see a whole lot of difference from last year.

I think the valley areas will see a couple of three at least one inch snows. So like Chattanooga can get one Cleveland could get one day, don’t get. Sometimes North Georgia, gets them sometimes, Southeast Tennessee. And I think that’ll be the case again this winter.