Two local businesses with strong ties to the areas in Florida tragically hit by Ian have joined forces to collect necessities for the hurricanes victims. Stacy Slockbower is the owner of Pins and Needles, she’s from Cape Coral, Florida and the first Miller’s Ale House was opened in Jupiter, Florida.

“We are looking for prepackaged foods, bottled waters, batteries, phone chargers, toiletries, anything really,” said Slockbower. “We had spoke to one family member that we were able to get in touch with that was a little bit further inland. They waited over two and a half hours at a store just to get a loaf of bread. They had no fresh food. They had no fresh anything. There’s nothing available.”

Donors can bring the supplies to the Miller’s Ale House on Gunbarrel Rd.

You can donate in Hixson to the Pins and Needles Drop Off Zone but you will need to call ahead first.

Slockbower said there is no set date for when they will stop accepting donations. 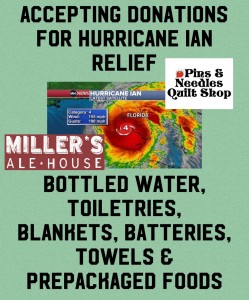 Videos of the destruction caused by Hurricane Ian have prompted good Samaritans from all over the country to step in and help, including here in the Scenic City.