Police reports say the chase started in the Soddy Daisy area, headed down Highway 27 and ended with a pit maneuver at I-24.

Traffic is snarled now by a crash at the I-24/Highway 27 juncture.

Preliminary reports from police say that no officers have been injured.

But they are still assessing other wrecks along the way.

A witness says that it started when a red pickup forced several vehicles off the road on Highway 27 in Soddy Daisy around 5:30.

A red pickup is now pinned against the retaining wall by police cars at I-24.

We’ll have more information on what happened as it becomes available. 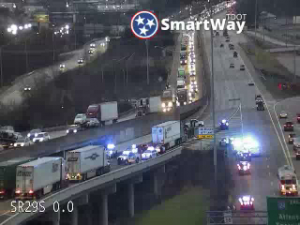 Half-price tickets at the Tennessee Aquarium during College Days