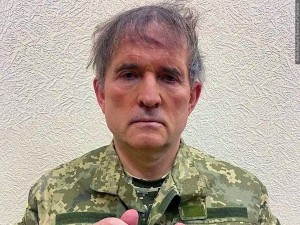 Viktor Medvedchuk, one of the most prominent pro-Russian Ukrainian politicans

KYIV, Ukraine (AP)- Ukraine’s state security service has posted a video of a Ukrainian politician held on a treason charge offering himself in exchange for the evacuation of Mariupol’s trapped civilians, while two British men who surrendered to Russian forces in Mariupol appeared on Russian media asking to be part of an exchange.

The video of Viktor Medvedchuk, the former leader of a pro-Russian opposition party with personal ties to Russian President Vladimir Putin, was posted Monday. In it, he appeals to Putin and Ukrainian President Volodymyr Zelenskyy by name to consider the exchange.

Medvedchuk was detained last Tuesday in a special operation carried out by Ukraine’s state security service, or the SBU. The 67-year-old oligarch escaped from house arrest several days before the hostilities broke out Feb. 24 in Ukraine. He is facing between 15 years and life in prison on charges of treason and aiding and abetting a terrorist organization for mediating coal purchases for the separatist, Russia-backed Donetsk republic in eastern Ukraine.

The British men identified themselves as Sean Pinner and Aiden Aslin. In one video, Pinner asked British Prime Minister Boris Johnson hoped to be exchanged. Pinner had deep circles beneath his eyes and appeared exhausted, but he said the two men had been treated appropriately.