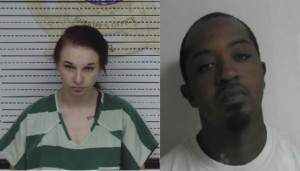 ATHENS, Tennessee (WDEF) – Prosecutors tell WVLT News that they will seek the death penalty against a couple accused of a deadly quadruple shooting last fall.

Jazzmine Hall and Curtis Smith have been charged with four counts of Felony Murder.

There were actually six other people in the house in Riceville on September 25th.

One escaped through a window and another played dead after the shooting.

Investigators say the trouble started at the house when the two arrived around 8 AM.

They say Jazzmine got into an argument with a male victim at the house about their 10 month old child together.

A surviving witness says she took the child from Trevon Hall then shot him.

She then handed the gun to Smith and told him to finish them off.

Investigators say Smith then shot at everyone else in the house.

The couple fled the scene but was captured in Polk County.