CHATTANOOGA (WDEF) – Protesters hit the streets, parks and even the Supreme Court on Friday to show their displeasure with the ruling overturning Roe V. Wade on abortions.

Here in Chattanooga, a few hundred people from the area attended a protest at Coolidge Park.

A few hundred people from the Tennessee Valley area and North Georgia protested against Roe VS Wade being overturned.

Victoria Flores told us “It is between a healthcare professional and the patient. It is a medical right. It is not something you just take lightly. It’s not a political agenda. It hurts my heart. It hurts because I know what this means. We’re gonna have An uphill battle but I believe we will overcome it.”

Governor Kemp in Georgia warned protesters to keep it peaceful. 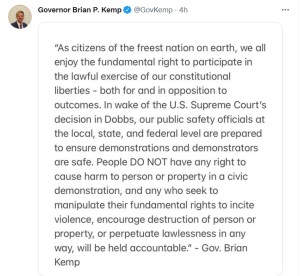