DALTON, Ga. (WDEF)- The stakes are continuing to rise in Georgia as numerous high stakes elections are upon us. In his tight battle for re-election against Republican challenger Herschel Walker, Senator Rapahel Warnock made a stop today at the Mack Gaston Community Center in Dalton.

To a crowd of supporters, Sen. Warnock touted the economic successes of the Dalton area. He praised Dalton by saying, “Who would’ve imagined that Dalton, Georgia, known as the Carpet Capitol. Known for its industry and textiles, all of that very important, would become the place where the largest manufacturer of domestic solar panels would be located?”

In a press briefing after his speech, News 12 got to ask if re-elected, what kind of legislation he would pursue to help other Northwest Georgia counties see similar economic investments? Sen. Warnock said that, “We need creativity, we need innovation, and I have led in pieces of legislation that encourages that, while at the same time working on the strength of our small businesses.” He expressed that legislation such as the Jobs and Infrastructure Act and the Inflation Reduction Act in his opinion would help bring more economic investments into Northwest Georgia.

Joining Senator Warnock was Marcus Flowers, the Democratic Challenger to Republican Congresswoman Majorie Taylor Greene. He discussed his motivations getting into the race, which stems from the Capitol Riots of January 6, 2021. Flowers stated that, “A Confederate Battle Flag was being paraded through our Capitol Rotunda, because of a big lie that the election had been stolen, by those like Majorie Taylor Greene.”

Early voting in Georgia is ongoing through Friday, November 4th, and there are still plenty who need to head to the polls. The Democratic Chair of Whitefield County, Debby Peppers, said that, “Locally, I think our turnout is kind of average, I don’t think it’s big. But, I think you see a lot of voters here who vote on Election Day.”

In related news, Sen. Warnock had some brief comments to offer on the attack of House Speaker Nancy Pelosi’s husband, Paul Pelosi, at their home in San Francisco. Warnock said that, “Well we’re still learning the facts. I’m monitoring the situation. I plan to reach out to the speaker on my way back to Atlanta today. I want to make sure she knows there are people praying for her and praying for her husband and her family at this time.” 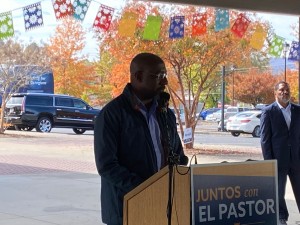 Sen. Rapahel Warnock giving a campaign speech in his reelection bid in Dalton.