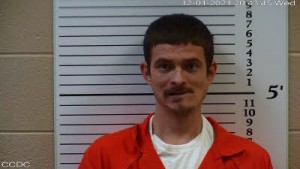 MURPHY, North Carolina (WDEF) – Justin Ryan Barber is back in the North Carolina mountains after disappearing from his last known address as a registered sex offender.

The 32 year old man was convicted 13 years ago of incest.

In January, he registered a new address in Murphy.

But when his name came up in a criminal investigation into some stolen coins, deputies found he wasn’t living there anymore.

Eventually, he was found in New York, near Buffalo, with the help of U.S. Marshals.

Barber has been brought back to North Carolina to face a charge of violating the sex offender registry rules.

But he will also face charges including breaking into a vehicle and financial card theft.

Chief Deputy Joe Wood stated “The Sex Offender Registry is an outstanding tool in keeping track of those who have offended against victims, both adult and children.”

“As you can see we have recognized for some time that monitoring and administering the Sex Offender Registry in Cherokee County is a large task and have partnered with State and Federal Agencies to ensure outcomes like with Barber, who not only is suspect in violations of the Sex Offender Registry but is suspect in several other crimes, not only in Cherokee County and Western North Carolina but out of state as
well. Outstanding work by all involved.”

So what does North Carolina's Madison Cawthorn do next?