The ranking considers both the quality and cost of broadband internet, cost of living, and safety among other factors.

Dalton also ranks #2 in small cities and the best in the south for those who work from home.

Dalton leaders have worked to bring high-speed internet to all residents.

“This is exciting. That’s obviously going to be a growing trend in the future,” said Dalton Mayor David Pennington. “This tells people that we have the infrastructure here to support working from home with Dalton Utilities’ Optilink high speed internet service – people claim to be ‘gig cities’ and everything like that, but we’ve been a gig city for a long time – it really just reinforces what we already knew, Dalton is a great place to live and a great place to work.”

Here is Ownerly’s breakdown on why Dalton rated so high in their analysis.

Despite being a manufacturing hub, the city offers a lot of amenities for digital workers: Broadband coverage is higher than most other cities we examined, and the city has the lowest cost of utilities among our top 10. The city’s greenspace score—a measure of parks within a 10-minute walk—is lowest among our top 10, but Dalton has a wide variety of parks and hiking, biking and canoeing opportunities within a 20-minute drive. Quick getaways are a short drive away, with Atlanta about 90 miles south of Dalton and Chattanooga, Tennessee, 35 miles to the north.

— Small cities scored best, only 5 of the top 25 have more than a quarter million people

— The South does not fare well on the list.. the Midwest and Northeast are the best regions for remote workers

— Despite all the tech giants out west, California and the Pacific Northwest do NOT score well because of their high cost of living 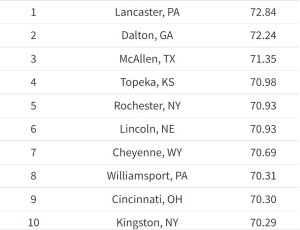 “This is a great place to live, and more and more people that don’t have to live in a metro area, I think that people that can move out of those big cities want to move out of those big cities,” said Mayor Pennington. “But they want to remain close enough to be able to get there. And no matter if your home office is in Chattanooga, Atlanta, wherever it is we’re also right on I-75 so you can get there quickly.”