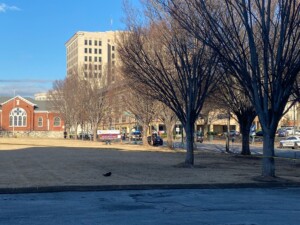 The scene where 26 year old Damean Alexander Jones was killed after a police chase.

A suspect, who has been identified as 26 year old Damean Alexander Jones by the Tennessee Bureau of Investigation, was wanted for stealing a car out of Catoosa County according to the Hamilton County Sheriff’s Office, led police on a chase through Downtown Chattanooga that ultimately resulted in their death at the intersection of MLK Boulevard and Lindsey Street.

A witness who at the scene, Stracy Bonner, described the moments that led to the Jones’ final confrontation with police. Bonner vividly painted a picture by saying, “Off of Georgia (Avenue), he made left onto ML King (Avenue) with the door open. As he approached Lindsey (Street) , another officer who was in the rear of him, the one approaching from the front, they boxed him in. When they boxed him in right there at the light at Lindsey and MLK, that’s when he got out the door and started firing at the officers.”

Another witness, Father David Carter of The Basilica of Saints Peter and Paul, said that he, “heard gunshots, multiple gunshots, in rapid succession, and the gunfire stopped, and I heard even more police cars coming from all angles, and for quite a bit of time, so I knew something had happened.”

According to HCSO, the situation began this morning at about 5 a.m. when a Hamilton County Sheriff’s Deputy spotted a stolen vehicle from Catoosa County and attempted to conduct a traffic stop. According to the TBI, Jones refused to stop and a chase ensued where the suspect began to fire upon officers, and they were eventually able to get away. Later in the morning, Jones was spotted by Hamilton County Sheriff Austin Garrett at the Motel 6 off of Bonny Oaks Drive, beginning a second police chase. This chase went all the way downtown, ending in the death of Jones.

Bonner described his experience as the gunfight went down, “I heard five or six shots before I realized they were shooting. And by the time I realized, that’s when the police started firing and I had to start ducking and trying to get behind the building because the direction he was shooting in was towards the officers, and he had three times in the windshield, and that’s the direction I was standing.”

Hamilton County Sheriff Austin Garrett says he is glad the injured deputy is going to be ok and that no one else was hurt, and that he is honored to serve alongside his deputies. The TBI is investigating the incident at the request of Hamilton County District Attorney Coty Wamp.

According to Hamilton County court records, Jones had been charged with numerous crimes in the past few years.