The Georgia State Patrol now says the 18 wheeler driver has been charged and arrested for vehicular homicide, driving too fast and failure to stop at a red light.

He is identified as Joseph Chislom.

FORT OGLETHORPE, Georgia (WDEF) – For the second day in a row, Catoosa County has seen a fatal wreck.

The latest happened on Friday afternoon around 3PM in Fort Oglethorpe.

The Georgia State Patrol says an 18 wheeler collided with an SUV in the intersection of Battlefield Parkway and Three Notch Road.

They say the Chrysler Pacifica with five people inside was trying to turn onto the Parkway when it was hit by the truck.

Two people in the SUV were killed.

Three juveniles in the SUV were taken to the hospital and listed in stable condition.

The driver of the 18 wheeler was not hurt. 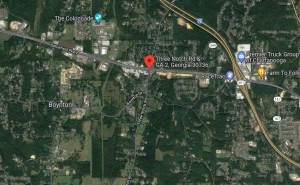