If approved, they would build both a sport utility and pickup for the U.S market

BERLIN, Germany (WDEF) – Reports are surfacing tonight that a vote is coming up tomorrow in Germany that could have a major impact her in Chattanooga.

Multiple news outlets say the Volkswagen Board will vote on a proposal to create an entirely new company specifically to produce new electric vehicles for the U-S market. 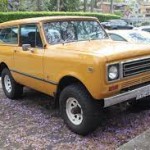 It would be called “Scout” based on the old International Harvester brand that competed with Jeep in the 1960s and 70s.

The new Scouts would include both an electric sports utility vehicle and a pickup for the U-S market.

But the real question is whether those Scouts would be built in Chattanooga.

We’ve seen recent reports that V-W is considering both a new vehicle plant and an electric battery plant to add to our area.

But the Scout is built on a completely different body… so the company could build fresh somewhere else.

We may learn more tomorrow.

Volkswagen hopes to begin making the Scouts in four years.