CHATTANOOGA (WDEF) – A woman was taken to the hospital Tuesday morning following a house fire in the North Brainerd area.

Firefighters found flames and heavy smoke coming from the home when they arrived.

They say they had a hard time controlling the fire inside because of an “extreme amount of contents” in the home.

In all, they spent several hours at the scene to get it under control.

The resident suffered from smoke inhalation. 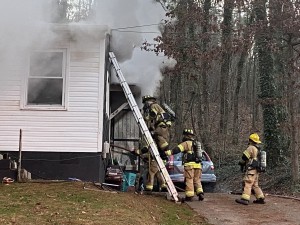