Residents of Signal View Apartments clear out their homes after fire 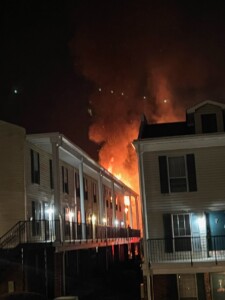 UPDATE: The cause of the fire is believed to be an electrical problem, possibly related to a heating unit in a top floor apartment, according to fire investigators.

This is the third fire at Signal View Condos within two months.

The previous fires were much smaller and took place in early November.

The flames caused catastrophic damage to at least 19 other units, however no one was hurt.

First responders arrived on the scene around 1 a.m. to contain the fire.

Multiple residents say no fire alarms or smoke detectors went off, and the only reason they knew they were in danger is because of a good Samaritan driving past the complex.

“We were in bed, some lady saw the flames from the road. If it wasn’t for her, we probably would be dead because we – the alarms didn’t go off, nothing went off,” Tori Payne, a five year resident of the complex, said.

Residents affected by the fire are reported to have slept in the clubhouse of the apartment complex.

Others spent the morning clearing out what personal items weren’t consumed by the flames.

Jessica Harris, another resident of Signal View, comments on the tragedy of the fire. “So many people just lost their homes and all of the Christmas presents that were given right before the New Year. You just don’t really think about those things until they happen,” she said.

The American Red Cross will be assisting residents who were impacted.

Payne blames the complex for the fire, saying, “The service here sucks. They never kept up on maintenance like they were supposed to, like it says in the lease they were going to do but never did. Their lack of everything is the reason that this happened. And we lost everything because of them.”

The official cause of the fire is still unknown at this time.