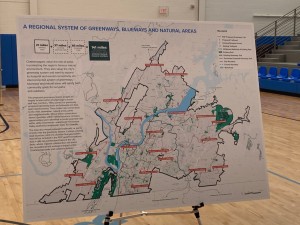 A map showing the plans for future expansion of parks and greenways across Chattanooga.

CHATTANOOGA, Tenn. (WDEF)-Chattanooga Parks and Outdoors held their second Public Workshop for their Parks and Outdoors Plan on Thursday evening. Residents could come out to Avondale Community Center to voice their opinion on the proposal to transform the park and greenway systems in Chattanooga over the next two decades.

The goal of the plan is to expand access to the system for residents while preserving green space in our growing city. Scott Martin, the administrator for Chattanooga Parks and Outdoors, said that, “No one moves to Chattanooga for a parking lot. We move here for our quality of life and our green spaces. You think about parks, the best ones that are ever built, are built ahead of development. So Central Park in New York would not have been possible if we try to build it today, it had to go in before the city was built, so let’s think about Chattanooga in 30 years. Let’s think about success in Chattanooga, how do we get ahead of that with a great park system that long after we leave the scene, folks are like man, I am sure happy that they set that land aside.”

The plan is set to be presented in front of the city council in December. Residents can give feedback at any time on the Chattanooga Parks and Outdoors website at https://chattanooga.gov/parks or at the Outdoor Chattanooga station at Coolidge Park.