Airports deciding what to do after mask mandate ruling

UPDATE: Officials with the TSA say they won’t enforce the mask mandate after today’s ruling.

ST. PETERSBURG, Florida (WDEF) – A federal court ruling today in Florida has airport authorities scrambling on what to do about mask mandates on flights.

The judge voided the national mask mandate for commercial flights and public transportation.

She also says that the Centers for Disease Control and Prevention did not justify its decision or follow proper rulemaking.

That has left airports scrambling to decide on what to do about the ruling.

The Justice Department has not commented yet on whether the government will appeal the ruling.

WTVF-TV in Nashville reports that BNA originally said they would wait for the issue to go all the way through the court system before changing policy.

But then they reversed the call and said they would drop the requirement immediately.

We have not heard any decision at this point from Chattanooga’s Metropolitan Airport of Hartsfield-Jackson in Atlanta.

The CDC just recently extended the mask mandate through May 3 to give them more time to judge the impact of the BA.2 omicron subvariant.

The airlines have lobbied for months to get the rule dropped. 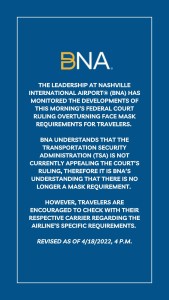