Wild weather will bear down on the holiday season with a soaking atmospheric river for the West, drenching tropical downpours for the South and soaring temperatures in the East. For most, dreams of a white Christmas will remain just that.

The Pacific Ocean is open for business, as a powerful Pacific jet stream will flood the U.S. with balmy air as well as some extreme weather over the next week. That includes a pseudo-subtropical storm in the Gulf of Mexico and up to foot of rain for some in the Pacific Northwest.

Starting Thursday and lasting through Sunday, the Pacific Northwest will be bombarded by what is called an atmospheric river (AR). An AR is a fast moving, narrow ribbon of water vapor over the Pacific Ocean that transports moisture at up to 15 times the rate of the average moisture flow at the mouth of the Mississippi River.

While the term has been around for some time, a team of scientists from Scripps Institution Center for Western Weather and Water Extremes, made it official this year by devising an atmospheric river scale.

Like the Saffir-Simpson hurricane scale, the atmospheric river scale measures the intensity of events from Category 1 to Category 5 — 5 being exceptional. This upcoming event weighs as an AR3 for many, but as high as an AR4 for parts of Oregon, rating strong to extreme.

North America from space. Elements of this image furnished by NASA NOAA

Dr. Anna M. Wilson, a field research manager at the Center, explained that the most important factors in determining the strength of the AR are the amount of moisture, the speed of the winds throughout the vertical column of air, as well as the duration of the event.

This time around, the three-day duration is the significant factor for most. However, there is a firehose embedded inside the river which, if stationary for long enough, may inundate a narrow corridor with dangerously rapid rain rates.

#AtmosphericRiver laser focused fire hose slated for Oregon, Washington and Northern California Thursday through weekend. In a narrow zone along the Oregon coast esp. at elevation I expect someone will get a foot of rain! (worst is Fri-Sat). Luckily it doesn’t stall for long. pic.twitter.com/Plkd0fYngb

The rain is coming at a good time — Oregon and Washington really need it. The past two months have been unusually dry, with some areas picking up only one-quarter of the normal rainfall. This event promises to dump a month’s worth of rain, a widespread 4 to 8 inches from Northern California to Washington, in just a few days.

AR3 to AR4 (Atmospheric River Scale) event will soak the Pacific NW with much needed rain the next few days. Over the past 60 days many areas have only had only 1/4 of the normal rainfall. But some rivers are forecast to flood. Image left WeatherBell, Image right ClimateToolBox pic.twitter.com/96hBezO6B6

While this storm is a fairly warm system, as the river of moisture collides with the higher-colder terrain, whiteout snows will pummel the mountains. The snow forecast for Stevens Pass, Washington, is 4 feet with Mount Baker getting buried under 5 feet.

Category 4 atmospheric river conditions are defined as “mostly hazardous but also beneficial.” So while the rain and snow are welcome news, it’s coming too hard and too fast. Flood watches are out for 10 million people, including the Seattle and Portland areas, with various rivers expected to crest near or above flood stage.

Depending on the intensity of the event, this type of flooding can have real consequences. An atmospheric river study published just a few weeks ago found that flood damage increases exponentially for each escalation in AR category, equating to a ten-fold increase for each step up in category.

The study concludes ARs are the primary driver of flood damage in the Western U.S., accounting for an astounding 95% of all insured flood losses in Northern California and the Pacific Northwest. From 1978 to 2017, estimated flood damage in 11 Western states amounted to $50.8 billion, and ARs accounted for $42.6 billion of that, or roughly $1.1 billion a year.

The authors found there’s already some indication that climate change is intensifying atmospheric rivers because of a warmer Pacific Ocean, and this is expected to get worse in the future. “In a warmer climate, extreme ARs will become more intense as they become wetter, longer, and wider,” making for more “volatile” precipitation patterns, the study said.

As a consequence of this fast Pacific jet stream pattern, a piece of upper-level energy will break off the fast flow, like an eddy, and meander into the Gulf of Mexico this weekend. While there, the storm will summon deep tropical moisture from the Caribbean.

Bowling-ball low will draw tropical moisture north from the Caribbean this weekend, inundating the deep Southeast with up to several inches of rain and severe storms in Florida. pic.twitter.com/2voXRvzNuI

In many ways the system will mimic a subtropical system, which is rare but does happen from time to time in December. While it likely won’t receive an official name, the impacts will be similar, with drenching tropical downpours.

The water will pile up across a large chunk of the Southeast, including Florida, with a few to several inches of record-challenging rainfall from Saturday to Monday. Also, as is typical of strong storm systems in the Gulf of Mexico this time of year, a line of severe thunderstorms is a likely scenario for Florida.

WPC 5-day Rainfall Forecast (thru this weekend). Heavy rain in the Northwest and Northern California Fri-Sat due to an Atmospheric River; while a non-tropical cyclone develops in the Gulf and moves across FL this weekend. Both systems potentially breaking daily rainfall records. pic.twitter.com/P8fKGvE6l0

As a result, temperatures 20 to 30 degrees above normal will move from the northern Rockies on Saturday, through the Midwest Sunday and Monday, and to the East Coast on Christmas Eve and Christmas Day. 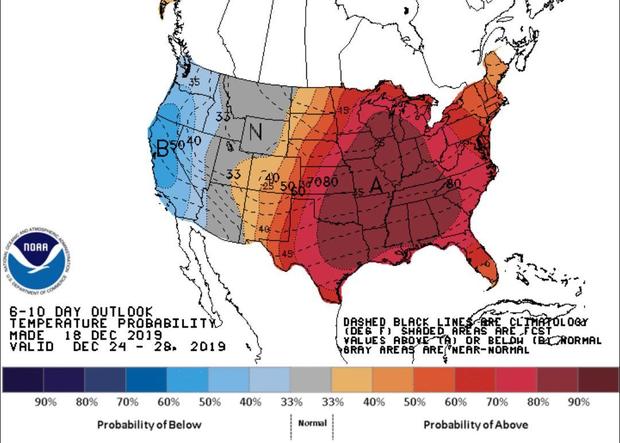