Hall of Fame pitcher Tom Seaver, the star of the “Miracle Mets” 1969 World Series championship team, has been diagnosed with dementia at age 74.

His family made the announcement Thursday through the Hall and said Seaver has retired from public life. He will continue to work at Seaver Vineyards, founded by the retired player and wife Nancy in 2002 on 116 acres at Diamond Mountain in the Calistoga region of California.

Seaver was diagnosed with Lyme disease in 1991, and it reoccurred in 2012 and led to Bell’s Palsy and memory loss, the New York Daily News reported in 2013.

“He will always be the heart and soul of the Mets, the standard which all Mets aspire to, this breaks my heart,” tweeted former Mets catcher Mike Piazza, a fellow Hall of Famer. “Do not feel worthy to be mentioned in the same breath.”

Statement from Jeff Wilpon on behalf of ownership and the Mets organization on Tom Seaver. pic.twitter.com/LozVvDR27T

Jimmy Kimmel was among celebrities doing the same:

Tom Seaver was my first favorite athlete. Love to #41 and the Seaver family @Mets https://t.co/9GNzDH5LtD

Seaver has limited his public appearances in recent years. He didn’t attend the Baseball Writers’ Association of America dinner in January where members of the 1969 team were honored on the 50th anniversary of what still ranks among baseball’s most unexpected championships.

Seaver pitched for the Mets from 1967 until 1977, when he was traded to Cincinnati after a public spat with Mets chairman M. Donald Grant over Seaver’s desire for a new contract.

“My biggest disappointment? Leaving the Mets the first time and the difficulties I had with the same people that led up to it,” Seaver told The Associated Press ahead of his Hall induction in 1992. “But even that I look back at in a positive way now. It gave me the opportunity to work in different areas of the country.”

He pitched his only no-hitter for the Reds in June 1978 against St. Louis and was traded back to New York after the 1982 season. But Mets general manager Frank Cashen blundered by leaving Seaver off his list of 26 protected players, and in January 1984 Seaver was claimed by the Chicago White Sox as free agent compensation for losing pitcher Dennis Lamp to Toronto. 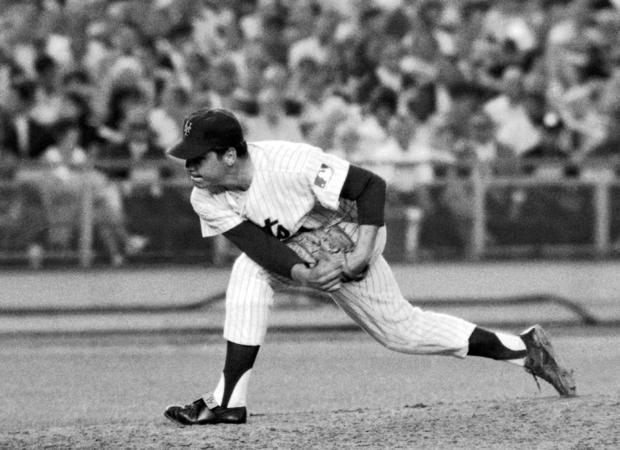 “From a team standpoint, winning the ’69 world championship is something I’ll remember most,” Seaver said in 1992. “From an individual standpoint, my 300th win brought me the most joy.”

A star at the University of Southern California, Seaver was drafted by Atlanta in 1966 and signed with the Braves only for baseball Commissioner William Eckert to void the deal because the Trojans already had played exhibition games that year; baseball rules at the time prohibited a club from signing a college player whose season had started. Any team willing to match the Braves’ signing bonus could enter a lottery, and the Mets won out over Cleveland and Philadelphia.

Among baseball’s worst teams from their expansion season in 1962, the Mets lost more than 100 games in five of their first six seasons and didn’t win more than 73 games in their first seven years. With cherished Brooklyn Dodgers star Gil Hodges as their manager, a young corps of pitchers led by Seaver, Jerry Koosman, Gary Gentry and a still-wild Nolan Ryan, and an offense that included Cleon Jones and Tommy Agee, the Mets overtook the Chicago Cubs to win the NL East with a 100-62 record.

They swept Atlanta in the first NL Championship Series to reach the World Series against highly favored Baltimore, which had gone 109-53. Seaver lost the opener 4-1 in a matchup with Mike Cuellar, then pitched a 10-inning six-hitter to win Game 4, and the Mets won the title the following afternoon.

Perhaps his most memorable moment on the mound was at Shea Stadium on July 9, 1969, when he retired his first 25 batters against the Chicago Cubs. Pinch-hitter Jimmy Qualls got a one-out single to left-center in the ninth inning before Seaver retired Willie Smith on a foulout and Don Kessinger on a flyout.

“I had every hitter doing what I wanted,” Seaver recalled in 1992. “Afterward, my wife was in tears and I remember saying to her, ‘Hey, I pitched a one-hit shutout with 10 strikeouts. What more could I ask for?'”