Behind the scenes at America’s Test Kitchen

A whole year before publication, America’s Test Kitchen was fine-tuning a contender for its newest cookbook at its headquarters in Boston: a recipe for roasted carrots and shallots. On Day One of testing, deputy food editor Stephanie Pixley was all about experimentation. She asked, “Is it salty enough? Not too salty?”

“There’s a sweetness with A that’s like a natural, carrot-y sweetness; with B, tastes a bit more flat,” noted one test chef.

Their conclusion: medium-sized carrots, any kind, cooked in butter at 450 degrees.

End of story? Not in this busy place. On any given day, a television show is likely being shot, and a dozen or more recipes are being developed in the test kitchen. Food stylists tidy up plates for photographers, the pictures for a future cookbook, magazine, or one of America’s Test Kitchen’s websites.

Handling the food? Hand model Dan Cellucci, who does take special care of his hands. “Yeah, I mean, I’ll get a phone call once in a while, ‘Do you mind just getting a manicure?'” 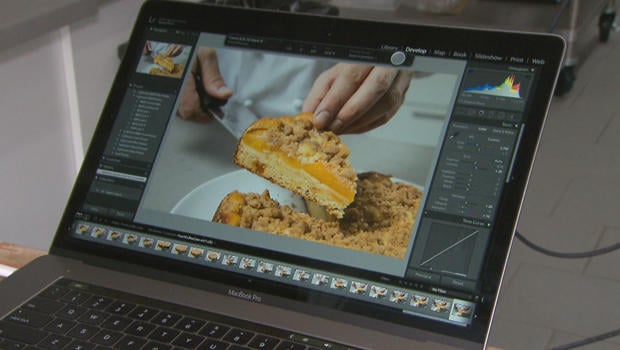 Dan Cellucci is the supporting talent of a food photo shoot. CBS News

Does that cake look good enough to eat? What’s left is headed for the take-home fridge, an irresistible perk for ATK’s growing staff, who now number almost 200.

In 2017 the expanding edible empire moved to a 55,000-square-foot space along Boston’s waterfront. It’s where they produce two television shows, two magazines, about 15 books a year, and their websites. Chief creative officer Jack Bishop, like a lot of ATK’s experts, is a regular on the TV shows, dispensing the often-surprising results of ATK research.

Such as? “Searing meat does not seal in juices. You do not need to sift flour. You should be steaming your eggs rather than boiling them.”

Bishop co-founded the company in 1993. “The mission really has been the same for 25 years, which is to empower home cooks to succeed in their own kitchens,” he said.

It was, and is, the opposite of slick. The first host of ATK’s TV shows wasn’t some flashy celebrity chef; it was nerdy New Englander Christopher Kimball, who noted, “We spend most of our time eating bad food.”

This was not an obvious blueprint for the huge success America’s Test Kitchen has had, especially since the company didn’t then – and doesn’t now – accept any advertising.

“In addition to the recipes, the review content’s a very important part of the mission of America’s Test Kitchen,” said Bishop. “And that’s difficult to do if you are also accepting advertisements from the same companies that you’re then reviewing.”

Lisa McManus gets paid to abuse stuff, in this case skillets, in order to figure out which ones are tough enough to take it. “Wow, okay. Bad. Warped.”

Just think of the job satisfaction! “You know, we always try to find out why did the winners win and the losers lose,” she said. “We don’t just say, ‘Go take our word for it.’ We want to prove why.” 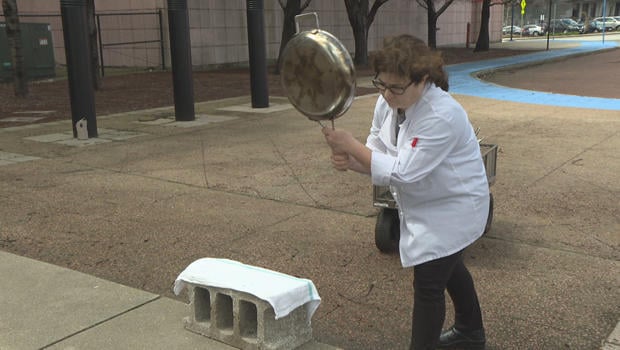 Lisa McManus does things to cookware you should never have to. CBS News

As executive tasting and testing editor (how’s that for a title?), her rigor is part of the reason people trust ATK product recommendations. Trust is the reason ATK’s cooking shows reach more than four million viewers.

“Our whole business is cooking things the wrong way so that we can eventually find the right way,” said Bridget Lancaster. She and Julia Collin Davison are two longtime test chefs and now hosts of the TV shows. They come across like skilled stand-ins for their viewers, who truly eat up their advice.

Which brings us back to that carrot and shallot recipe. Bishop said, “We send it out to be road-tested by volunteer home cooks. And if we don’t get 80% of the people to say, ‘Yes, I want to make that recipe again,’ it goes back to our test kitchen and gets reworked.”

Stephanie Patterson, of Wooster, Ohio, is one of 17,000 volunteer home cooks who signed up on the website to test recipes. She’s done do for nine years. “About 90 percent of my kitchen equipment is based upon their recommendations,” Patterson told correspondent Martha Teichner. 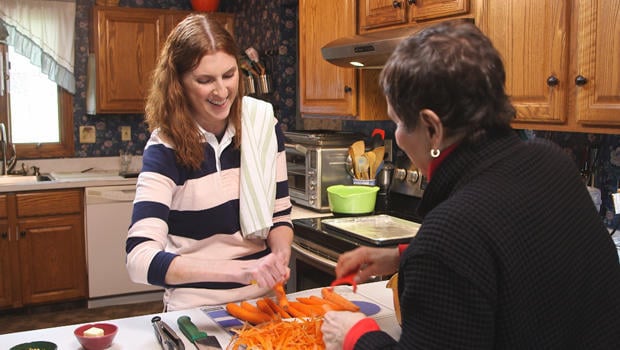 Currently, Patterson has four recipes in her email in-box to be road-tested.

Carol Chriss, of Holmdel, New Jersey, is another volunteer. “It’s almost like there’s too many recipes and too little time!” she laughed.

To say they’re groupies is an understatement. Patterson has joined their Facebook group and follows them on Instagram. “It’s definitely a club,” she said.

For Patterson, who has muscular dystrophy, it’s actually more than that; it’s a world. “I feel like I’m helping them make the recipe as good as it can be before they print it.”

“And it makes you part of their family?” Teichner asked.

So, did they like the carrots and shallots recipe? The recipe made the cut. It’s on page 86 of America’s Test Kitchen’s just-released “Vegetables Illustrated” cookbook.