Sheriff looking for suspect in a fight video

Hamilton County has identified the man who threw the punch. They promise more details soon.

BIRCHWOOD, Tennessee (WDEF) – The Hamilton County Sheriff’s Office needs your help to identify suspects from a fight caught on video.

The incident happened on Wednesday evening of July 15th at the Island Oasis on Highway 60 in Birchwood.

The convenience store cashier says he was assaulted by a customer.

He says it started when a woman came into the store to ask if a man who had just bought some beer had also paid for gas.

She then slammed the door so hard it almost broke.

The cashier checked on the door, then went outside to ask why she was so upset.

But he says her boyfriend then told him not to talk to her.

The cashier says he tried to return to the store, but the boyfriend punched him.

The incident was caught on store video.

If you know anything about the suspect or any of the people in the video, please contact the Hamilton County Sheriff’s Office. 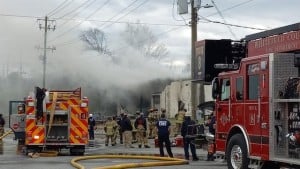